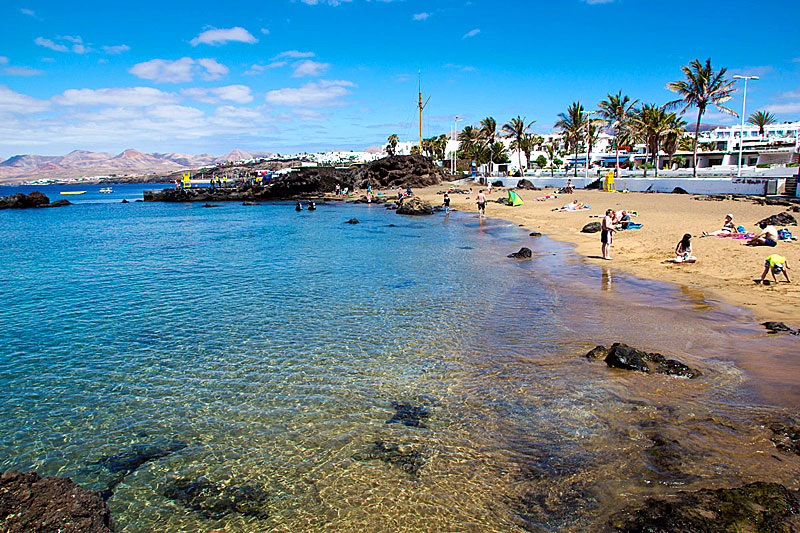 Also known as Pila de la Barrilla, is by far the most popular beach of Puerto del Carmen.

Pila de la Barrilla, literally translates as ‘the prickly saltwort basin’, where the locals would use its sharp stones to crush the saltwort plant and make soap or extract lye in the mid 18th century.

Playa Chica forms a small bay that seems to be sheltered by natural protrusions of lava, making this beach special in the stillness of its waters. It has become a must, not only to revel in its calm waters, but also because of the peculiarities hidden beneath the surface, on its ocean floor.

This is where the treasure of Puerto del Carmen is kept: If you like an adventure, don’t miss the chance to see El Veril de la Tiñosa, a magnificent sea wall. Diving under the still, warm waters of this bay you will find some of Europe’s most spectacular sea beds, as asserted by many professionals from the diving world. Such is the singularity and biodiversity of the caves carved out of the sea wall in Puerto del Carmen that it has been declared a Special Area of Conservation within the European Natura 2000 Network.

The popularity of Playa Chica is owed to the many secret corners it hides, such as the Cueva de las Gambas or Shrimp Cave, named in honour of the shoals of narval shrimps that populate it.