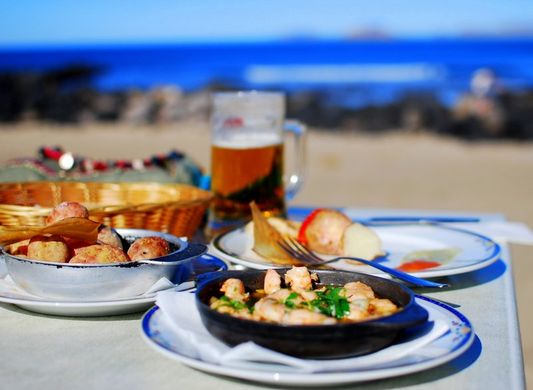 Lanzarote is an Island that offers many things and and good food is top of the list. Locals take pride in the basic natural ingredients, from mouth-watering seafood caught fresh that day to the tasty vegetables grown in the rich black volcanic soil, full of goodness and nutrients, from which the rich gastronomy of the island is produced. The food of Lanzarote is similar to that of southern Spain influenced by African and Latin American recipes. Whilst goat, beef and rabbit are typical favourites, fresh seafood such as dorada (sea bream, also known as sama), vieja and cherne are favourites when simply grilled.

The Spanish influences of tapas can be found all over the island in every restaurant. These small portions vary on each menu depending on where you eat. Don’t miss out on the ever-popular gambas al ajillo, which can be found on most menus. The gambas (prawns) are cooked with olive oil, brandy, chilli and heaps of garlic and served sizzling hot.

Canarians are big on their stews, putting much love and care into creating a tasty filling pot of spiced meat and vegetables. Look out for rabbit stew (conejo), which is a local delicacy. Another speciality here is Escaldon de Gofio de caldo de pescado – a rich fish stew made with gofio and vegetables, or ‘Sancocho Canario’, a stew made with dried fish and potatoes.

These are ‘wrinkly’ Potatoes boiled in seawater and served with Mojo, a traditional canarian Sauce made with Garlic and herbs or Paprika. The potatoes, which have a very distinct almost nutty flavour, are grown in the fields of black volcanic picón, which retains vital moisture in the semi desert climate. Usually served to complement fish dishes.

This was the carbohydrate staple, which was made from maize flour and toasted corn that had been ground in one of the many windmills that can be seen dotted around the landscape. Until the end of the 19th century when bread was a luxury eaten only at special occasions, gofio would have been an important part of every meal. It is served as an accompaniment to soups and other dishes and also sweetened as a dessert. Today it is used to thicken and flavour soups, stocks and stews.

These dishes are also not to be missed:

Conejo – baked or roasted rabbit served with garlic and herbs.
Pulpo – sliced octopus with olive oil and a pinch of paprika.
Lentejas – Lentils cooked with pumpkin, bacon, chorizo and peas.

And let’s not to forget to wash it down with a glass of Lanzarote wine – The eruptions of the 1730s, which covered a third of the island with layers of a fine black gravel called picón was at first seen as a complete disaster for the island. However, it was soon discovered that picón absorbed condensation and rain like a sponge, releasing moisture slowly and helping keep the roots of plants cool. Vines thrived in this climate. With hours of strong sunlight per year, plus mineral rich layers of soil below the picón, the grapes produced are of excellent quality and flavour and the Malvasia wines grown here regularly win international prizes and are amongst the best in the world. The wines have a characteristic light fruity flavour and are very crisp and dry, making a perfect complement to the many fish dishes of Lanzarote’s traditional cuisine.